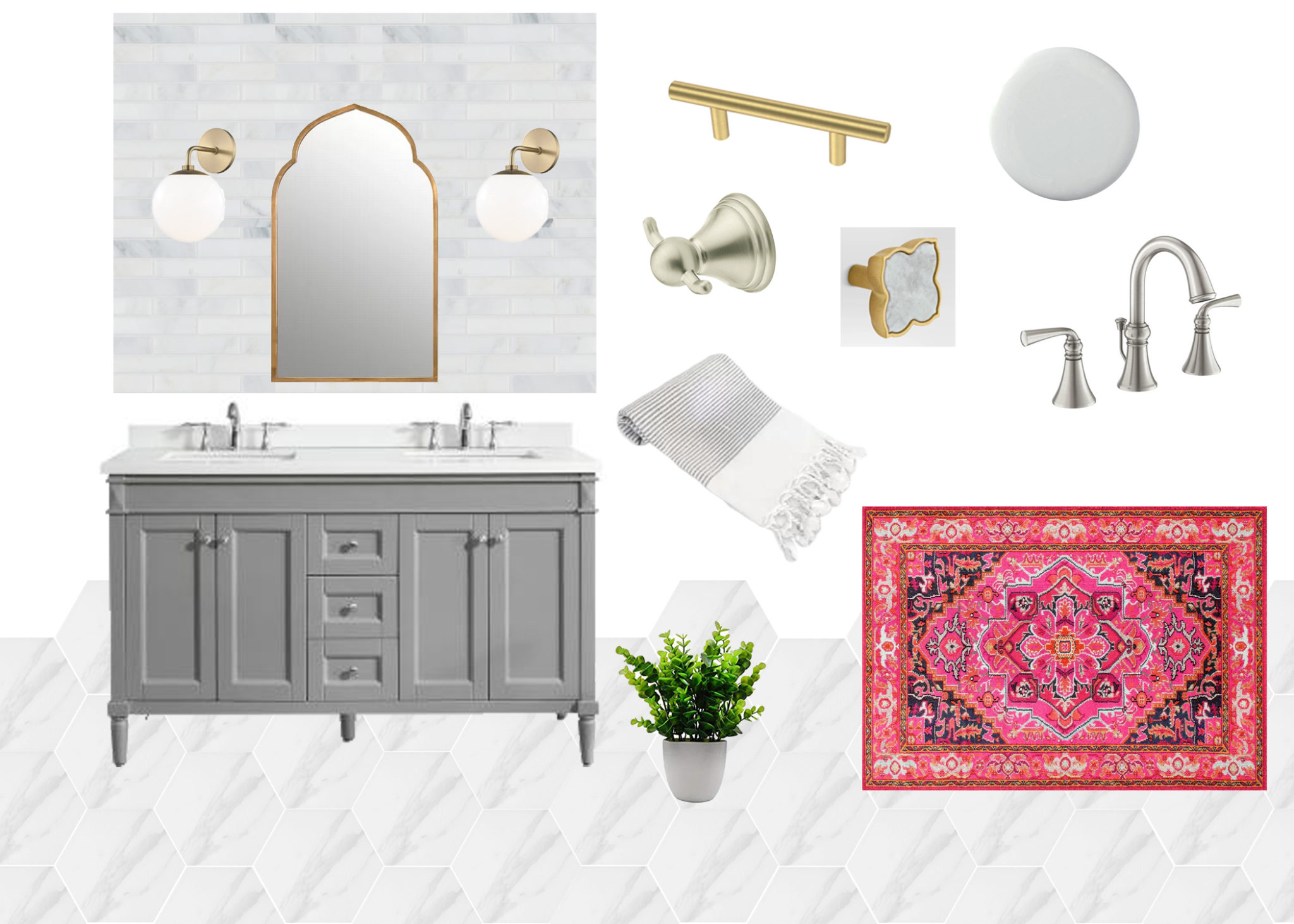 The time has finally come!! After 7 long years of waiting, we’re finally tearing apart our master bathroom and creating a new beautiful and functional master bathroom! I. Am. So. EXCITED! And, in traditional Jenny DIY style, we’re doing most of the work ourselves, so I’ll be bringing you all along for the ride.

But before we get into the new design, here’s what we started with: 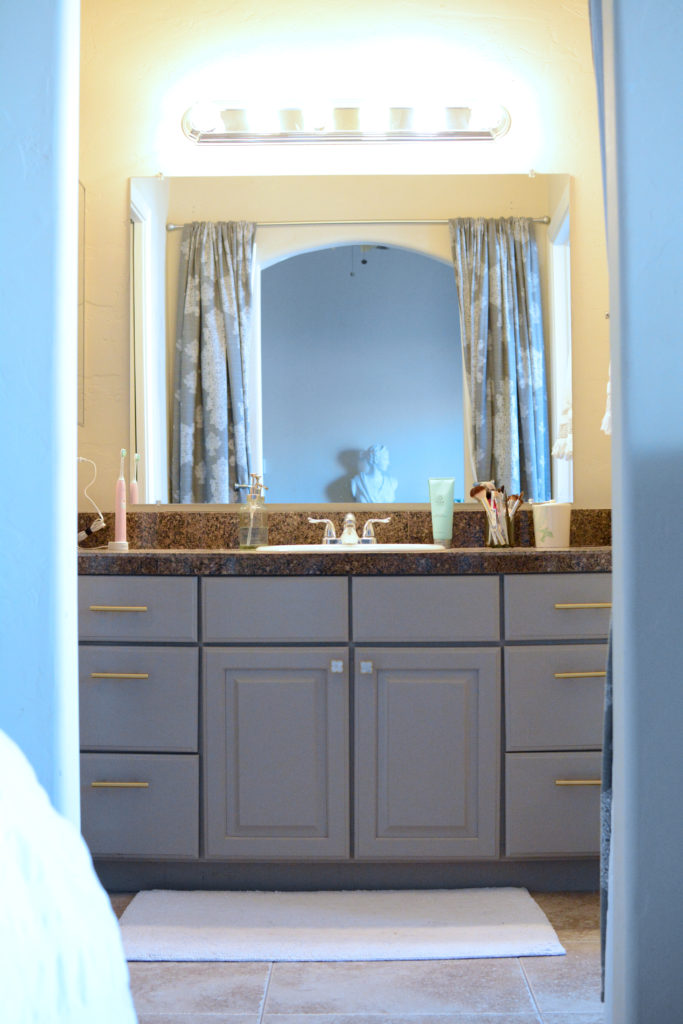 Like many homes now, there is no door, only an archway opening between our bedroom and bathroom. This is a particular problem for us because my job has me up very early in the morning (think 3 am) and I need to be able to get dressed and ready without waking my husband. 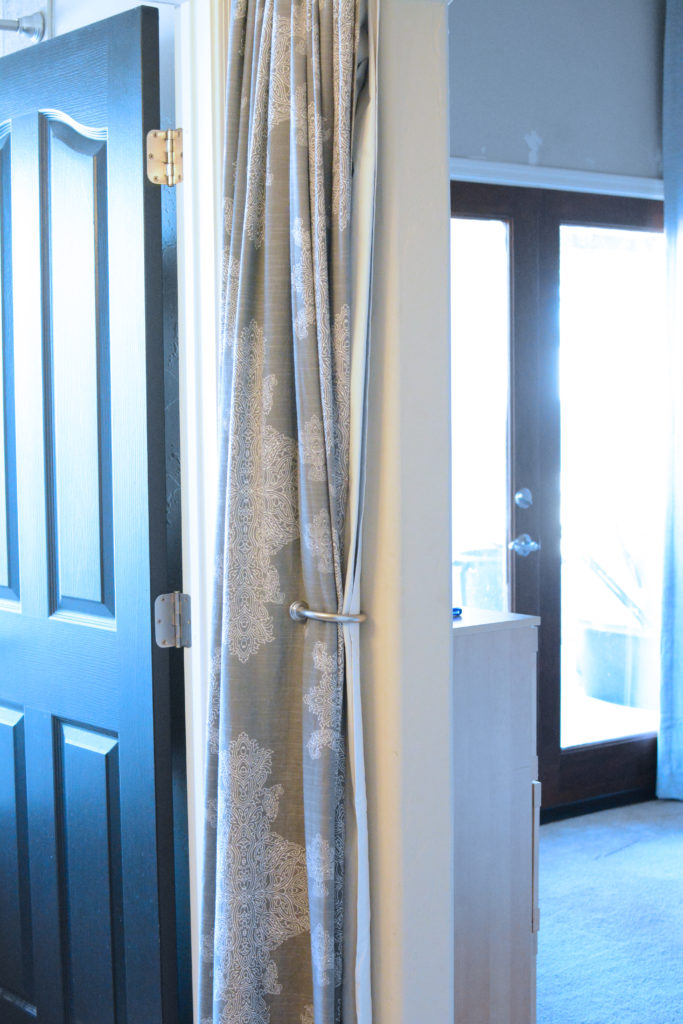 Our current solution has been blackout curtains which cut down on most of the light, but certainly not all. And it really doesn’t so anything for sound, so I’m always super aware of how loud the faucet is when I’m trying to wash my face and brush my teeth. We’re going to be tearing down the arch and putting a proper door in it’s place. 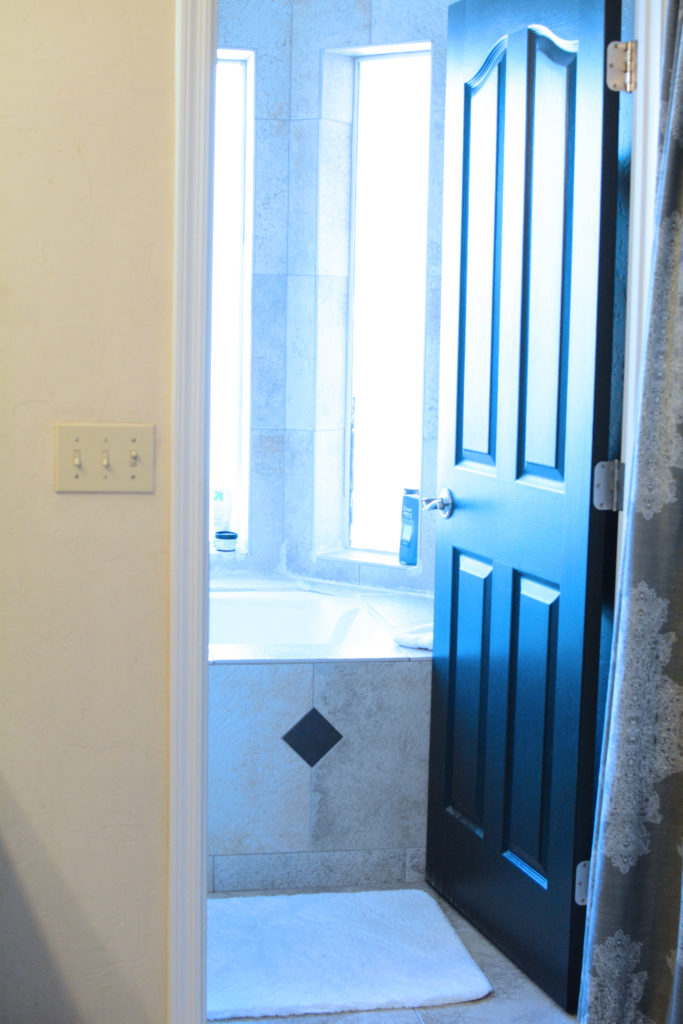 The toilet and shower area is separated from the vanity by a wall and door. The problem here is that the only natural light the whole bathroom gets is from the windows in the shower, and with a wall between the vanity and that room, it gets pretty dark. Not exactly ideal for applying makeup and other girly things, so this wall will be coming down. 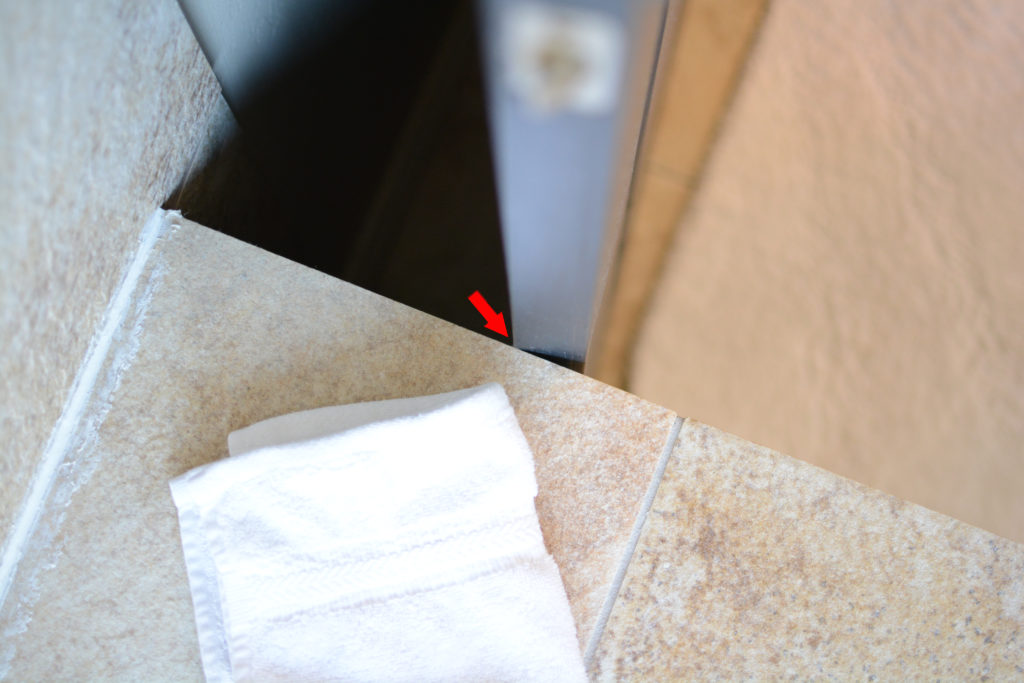 And here’s another problem. See where that arrow is pointing? The door hits the tub surround right there. We can’t even open the door all the way! So dumb. 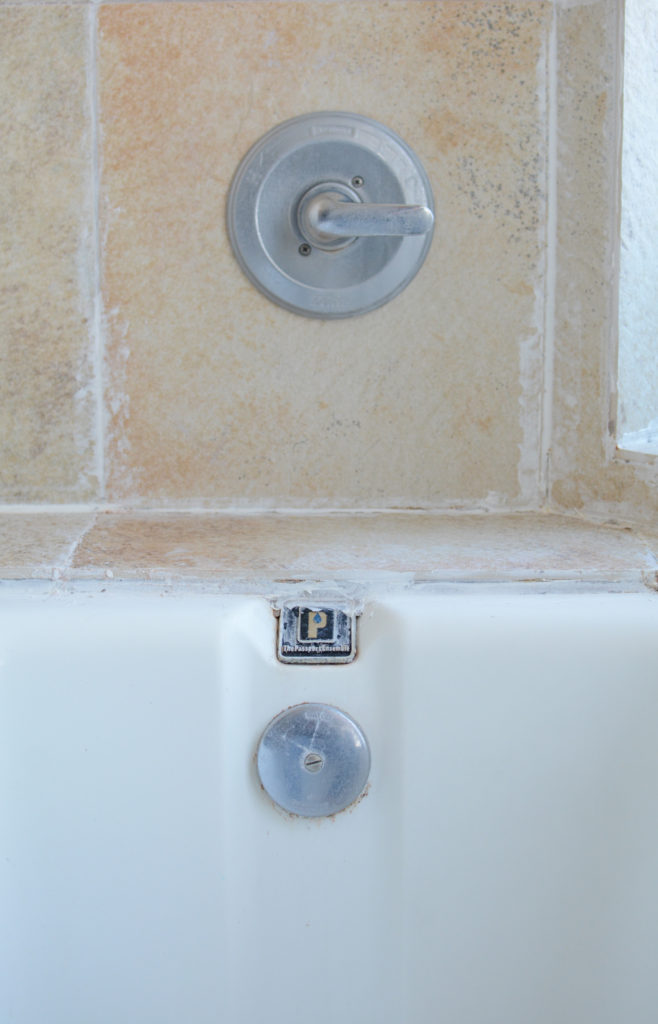 While I certainly understand the appeal of a soaking tub, converting one into a tub/shower combination isn’t a great idea. It’s obnoxious to have to hike your leg up 2 feet to step into your shower. And try doing it while pregnant! Super sketchy and dangerous. Oh! And take a look at what’s missing from the picture. See it? There’s no faucet to fill said soaking tub! If I ever wanted to use it, it had to be filled from the shower head! Ridiculous! Since I’m an infrequent bathtub user, we’re going to be tearing out the tub in favor of a walk-in shower. 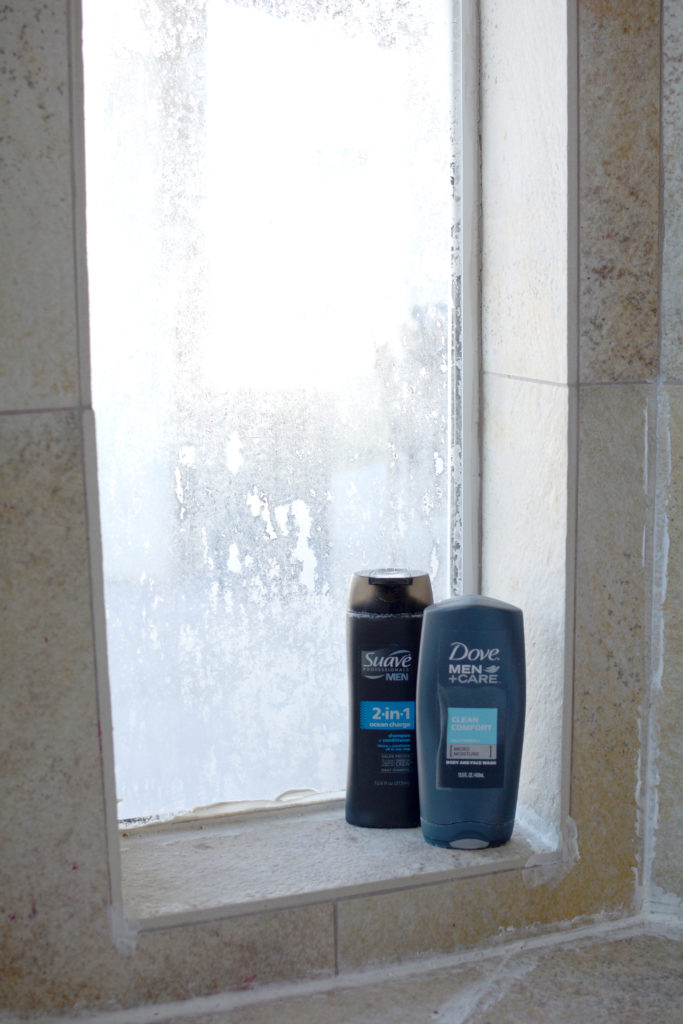 And those lovely, light-giving windows in the shower? They’re clear glass. Yup. Clear glass, full body windows in the shower. Oh! And did I mention our house butts up to an apartment complex? Hello neighbors! I used frosted glass spray paint to temporarily solve the problem, but it’s not really mean for wet areas, like showers, so it’s been slowly starting to come off. I tried to DIY frost the big window with etching cream, but that just turned into a big swirly mess. So these bad boys have got to go! 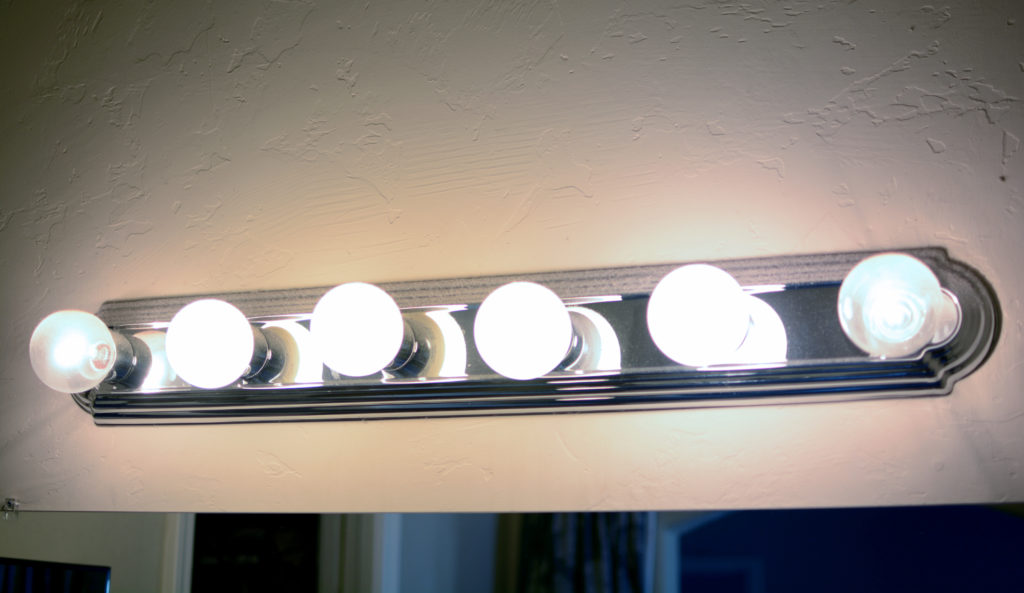 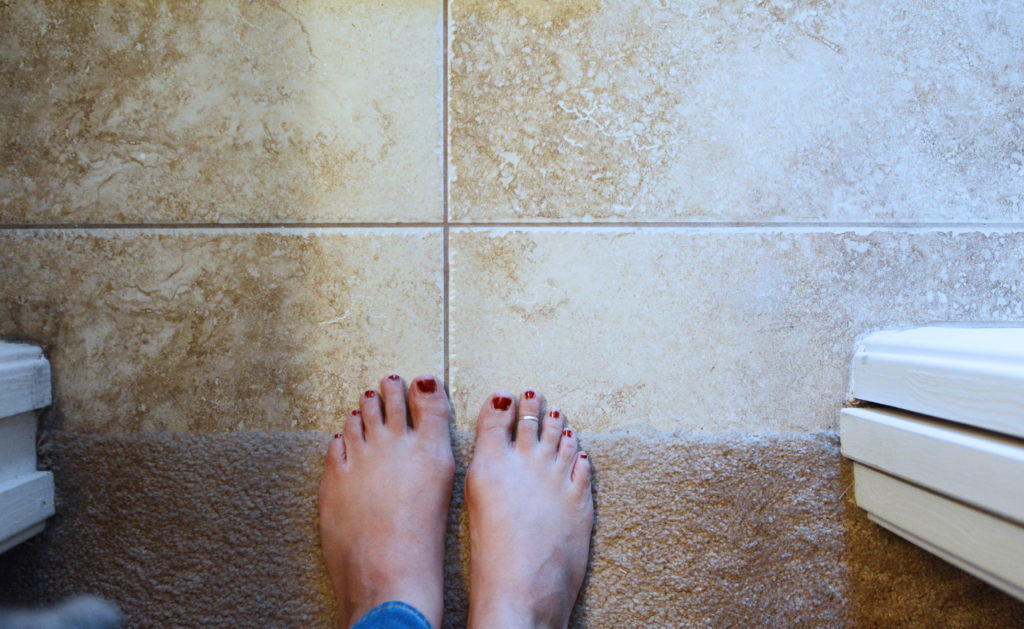 The tile is . . . fine, I guess, but I’m taking this opportunity to tear it up and replace it with something beautiful! And I’ll also be tearing out the old carpet in the closet to and continuing the tile into there.

Now that you’ve seen the before, here’s what we’re looking to do: 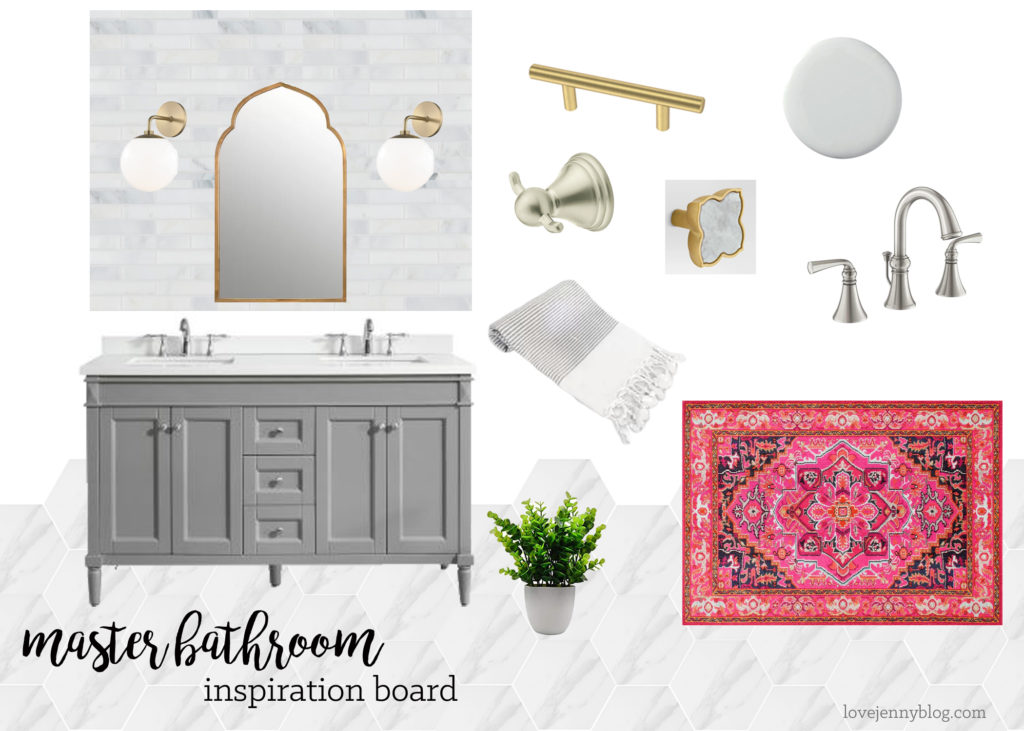 I’d already sort of started the makeover process by painting the existing vanity gray and adding new brass hardware from Target (here and here) and picking out a light gray paint for the walls. We’re sticking with just one sink but will be replacing the countertop with one that’s more marble-looking, installing an under-mounted sink, and updating the faucet. I bought some marble mosaic tile forever ago from Costco that we’ll be using to tile the wall behind the sink. The tile will extend all the way to the ceiling. Then we’ll add a gold mirror and switch out the bar light for a couple of gold, globe sconces.

The tile on the floor will be a hexagon shaped marble-like tile and I’ll be adding a pop of color into the bathroom via a fun, brightly colored rug. 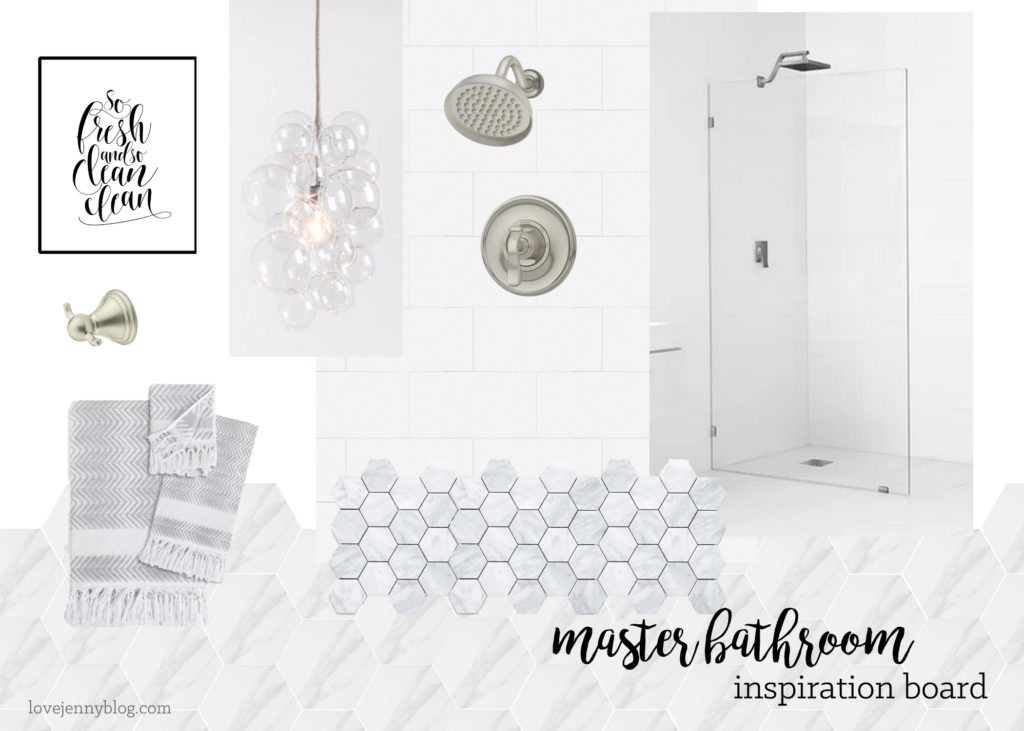 For the shower, since the bathroom isn’t the biggest, we’re going to save space by installing a door-less shower. So just one big pane of glass with no door. I’m so excited! I love how fresh and modern and open that looks! The shower will be tiled in over-sized white subway tiles with the floor and niches being marble mosaic hexagons.

We’ll add a new dial and shower head (of course) as well as some fun art. I’m obsessed with the idea of having a bubble chandelier in the bathroom! What better place to install one than the room where your get all sudsy? They’re pricey, so I’m trying to decide if I’ll splurge or figure out a DIY solution.

So that’s the plan! I’m So. Freakin. EXCITED!! Demo has already started and our bathroom currently looks like this: 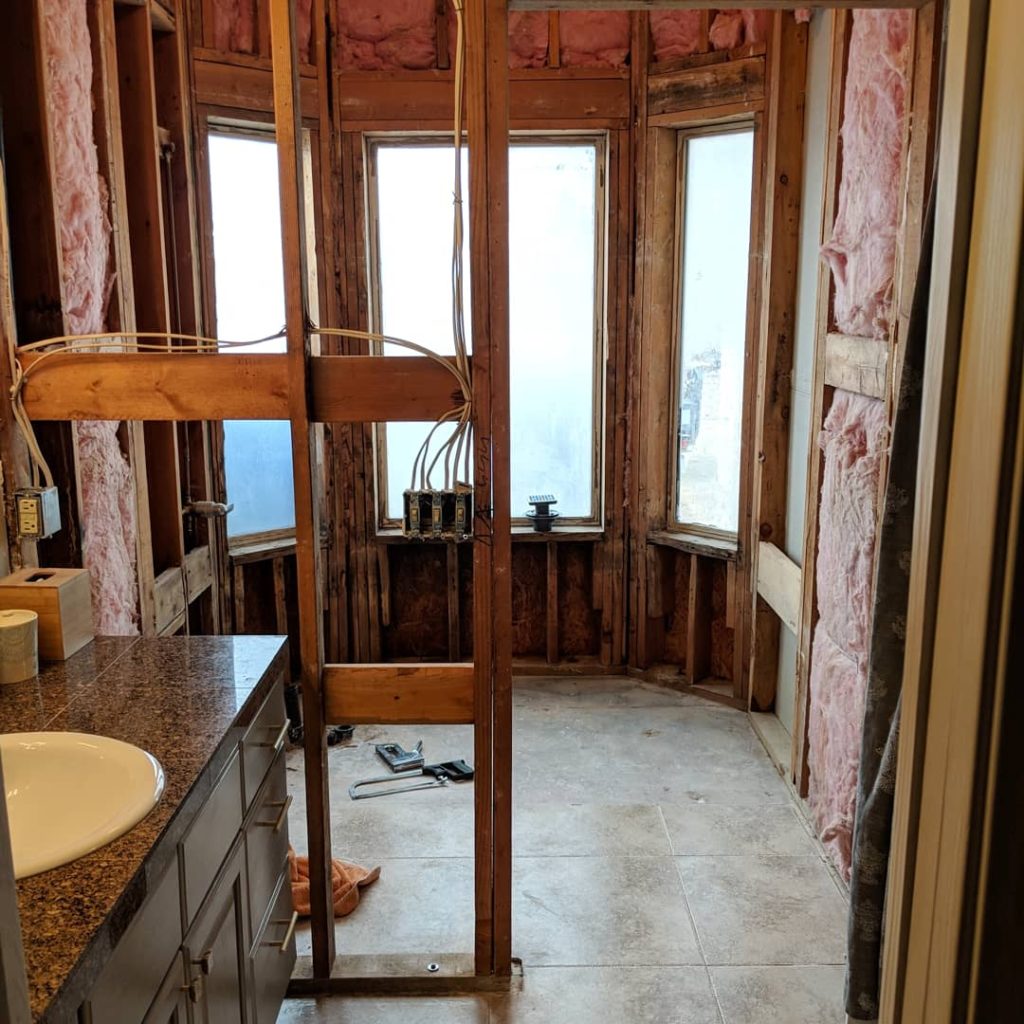 Already the room has so much more light! I know this isn’t going to be a quick project, since we both have full-time jobs and two kids to keep alive, but if four people sharing a single bathroom isn’t enough motivation to keep the train moving forward, I don’t know what is! 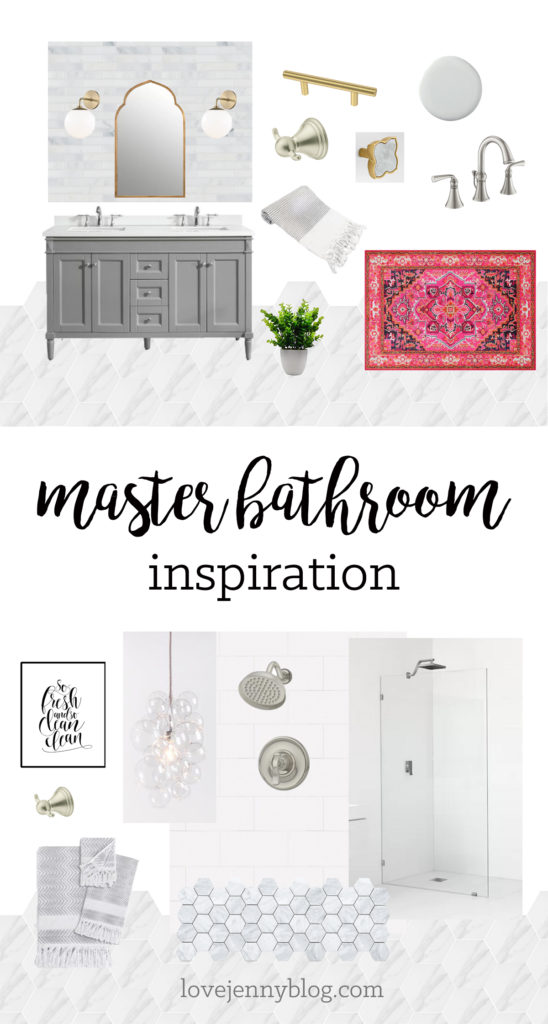