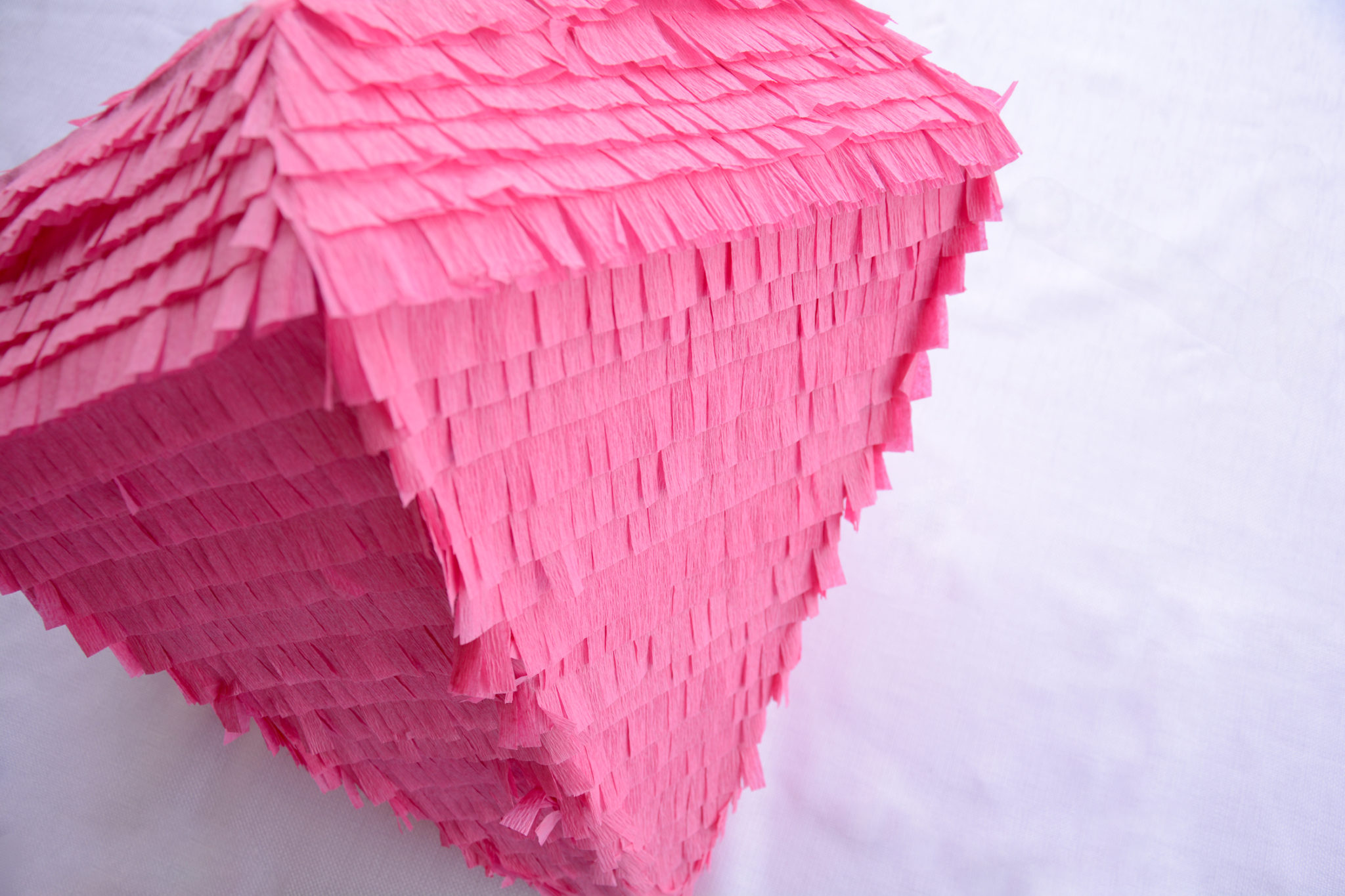 Growing up on the US/Mexico border, piñatas were always a birthday party staple. It didn’t matter what theme the party was or where the party was being held. There was always a piñata. And I loved it! The suspense of waiting for when it was time to bring it out. The fun of getting to take a few swings, trying to break it open. The excitement of scrambling to grab yourself some goodies! I knew it was a tradition I wanted to make with my kids. I had passed on the idea the last few years because Emma was so small, but when she turned 4, I decided she was old enough to understand and enjoy a piñata of her own.

So as I prepped for the girl’s Shimmer & Shine birthday party, I began a search for the perfect piñata. Ultimately I struck out on finding one that fit our party theme, so I decided to make one. A giant, pink (of course) Genie Gem! Now I’m going to show you, how you can make one too! To begin, I took my yardstick and marker and drew out 5 diamond shapes on one of the large pieces of cardboard. (You can make yours any size you want, but I’ve included my measurements for reference) I also added a little “treat door” flap that I could open to fill the piñata with goodies.

Originally, I had placed it on the bottom portion of the diamond, but once it was all together, I realized it was better to move it to the top portion. Before it sat too low and I wouldn’t have been able to put many treats in without it overflowing, so I moved it up higher. Problem solved. I also ended up adding a twine loop on the flap to act as a “handle” to make it easier for me to open. Once the diamond pieces were cut, I took my blade very lightly to score the seam between the top and bottom portion of the pieces. This made them easier to fold, while helping with uniformity. Then I laid out my pieces and duct taped the bottom of the pieces together, inside and out. Then I taped the top sections together. It’s starting to look like a gem! Once all the sides were taped together, I laid the whole thing upside down on the second piece of cardboard and traced out my top piece. Once I cut it out, I added a hook to hang it, then taped and zip tied the whole thing together. I decided to add the zip ties because I wasn’t sure that just tape would hold the top on once the piñata was filled with treats. The base of the piñata is done! Now to decorate it. For this part, we’re starting with our streamers, scissors, and glue. You’re going to work from the bottom of the piñata up, so it’s best to turn the piñata onto it’s top. Cut a strip of streamer that is twice as wide as the area you’re going to cover. Fold the strip in half, and make several little cuts on one side. This makes the piñata fringe. Then run a stripe of glue where you’ll put your streamer. Place your streamer (single layer) where you want it, then add a little more glue on top of it, and adhere the other half of the streamer. Your “fringe” should now be a double layer of streamer. Cutoff any overhang.

Keep working, row by row, side by side, until you’re done. For the top, I used the same process, working from opposite directions. I started on the outside and worked towards the middle. and at the center, I added a small stripe of streamer that had fringe cuts on both sides of the paper. That’s it! You’re done! Fill your piñata with goodies and go to town.