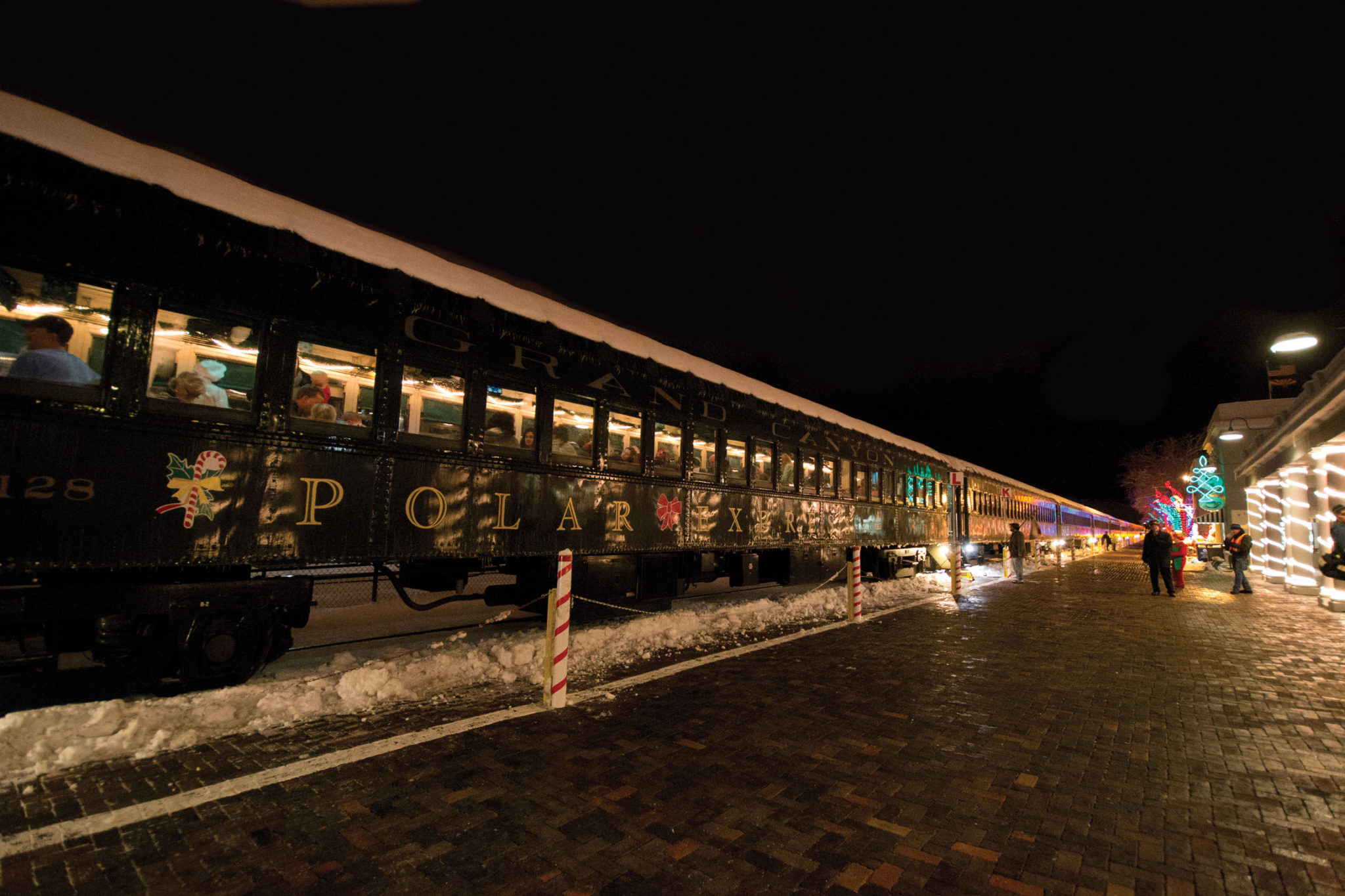 A Ride on the Polar Express

I’m sure you’ve heard of the Polar Express. If you haven’t read the book, then you may have seen the movie. The story of the Polar Express has been a Christmas classic for decades. A child rides a magical train to the North Pole and gets to meet Santa Clause! The train ride is filled with songs, hot chocolate, and magic.

So I’m sure it’s no surprise to anyone that Polar Express rides are popping up at train stations all over the country. This year, our family had the opportunity to take a ride aboard the Polar Express here in Arizona. Hosted by the Grand Canyon Railway & Hotel, this train ride takes you through the wilderness of Williams, Arizona to the magical “North Pole.” 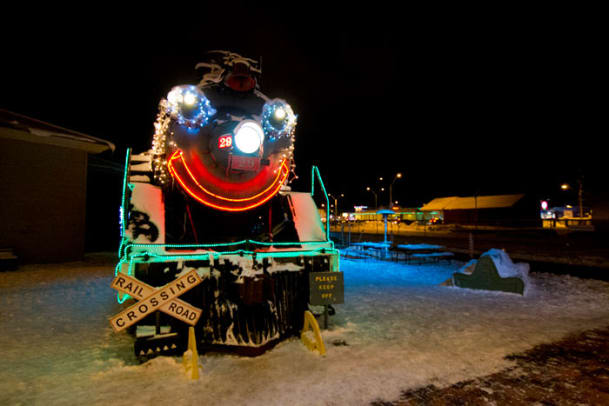 There are two departure times available, at 5:30 and 7:30. Rides start running in early November and usually continue through the first few days in January. Tickets sell out fast, so it’s important to plan ahead and grab your tickets as early as possible (we booked ours back in July and were still blocked out of our preferred boarding time). There are train-only tickets, which only include the train ride, or you can bundle your train ride with a stay at the Grand Canyon Railway Hotel.

The trip was a whirlwind experience for us. Our train ride was on a Thursday evening and I had to work that morning! I came home from work, we threw everything in the car, and immediately left to make the 4-hour drive up to Williams. We got there with barely enough time to check in to our motel and grab a bite to eat before heading to our 7:30 ride to the North Pole. 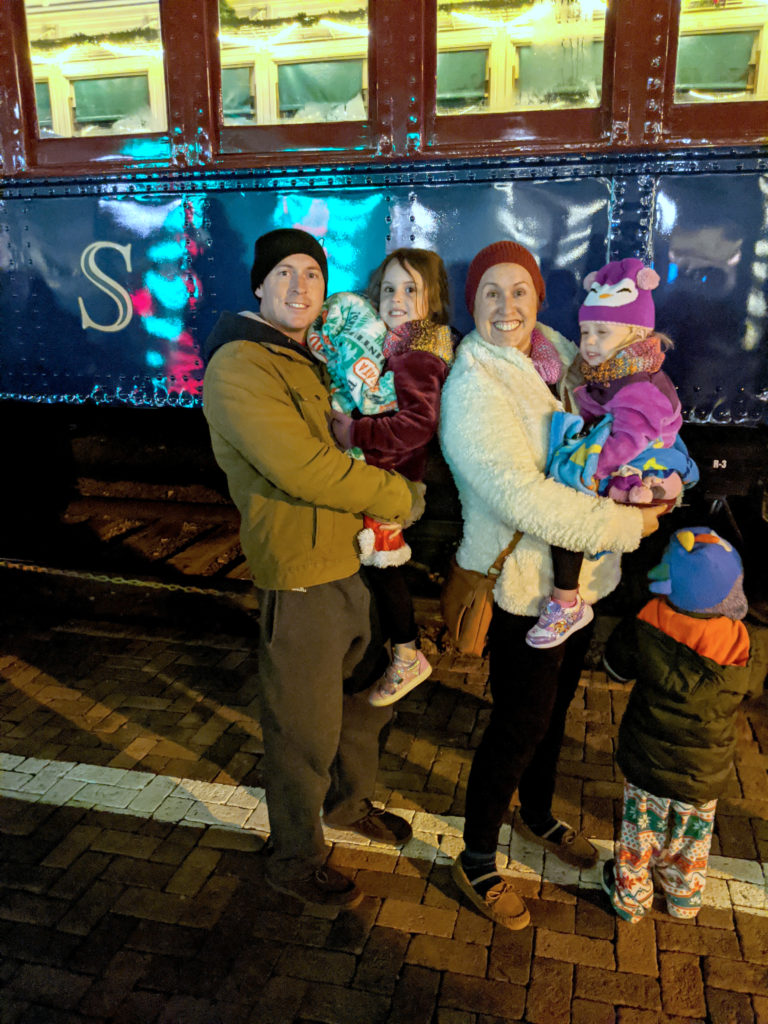 After a quick dinner, we went to Will-Call to grab our tickets. Yes, seats are assigned. Passengers wait for the train outside, on the platform, so keep that in mind when dressing for the occasion. It was in the 20’s the night that we went and so, so cold! Thankfully, we had everyone bundles up in jackets, coats, and scarves. 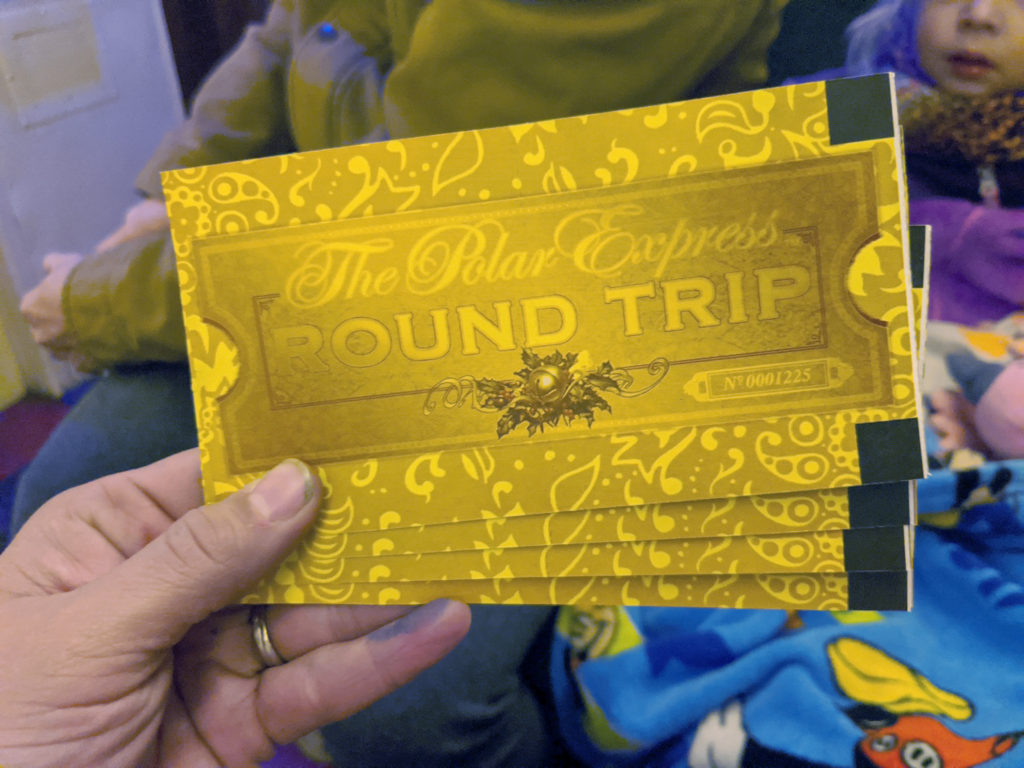 Our journey began just outside the platform area, where actors put on a short play featuring the scene with the little boy and the hobo on top of the train. After the brief performance, we were ushered onto the platform to find our car and wait for boarding to begin. Once it was time to get on the train, we showed our tickets to the conductor and got on the train. 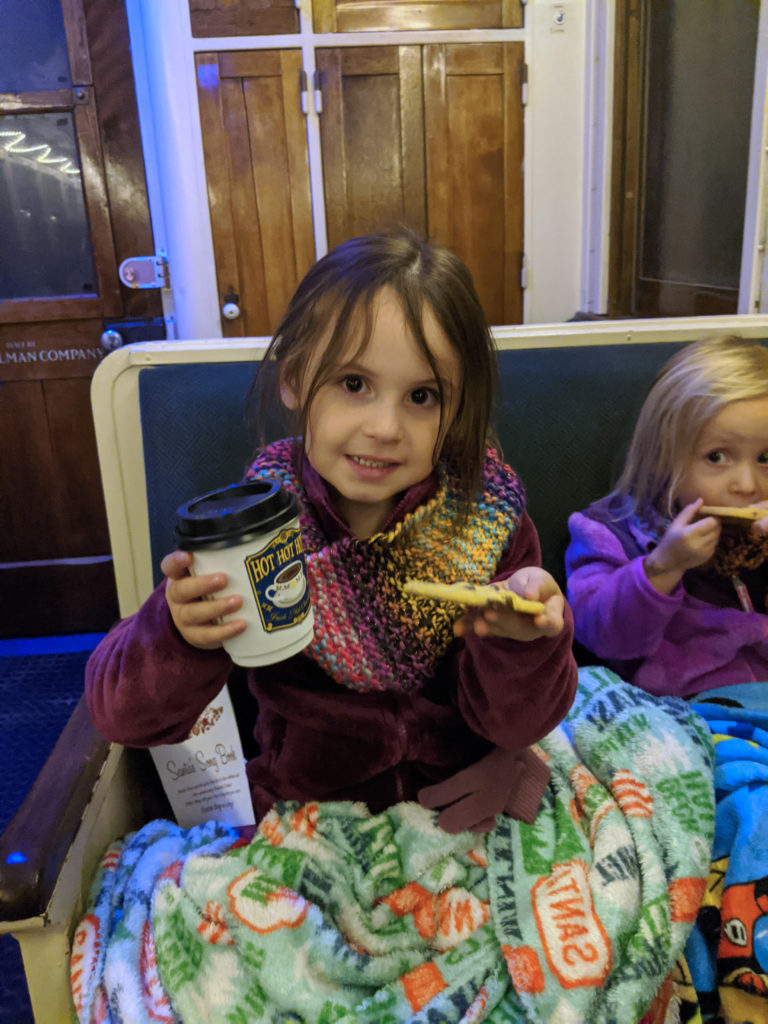 Shortly after the train departed the station, the magic began. There was a reading of The Polar Express book, while crew members walked up and down the aisle, showing children the pages. Our tickets were punched, just like in the story. All passengers were served a chocolate chip cookie and a hot cocoa. Then the singing began. The whole train got in on the action of belting out classic Christmas songs, like Rudolph and Frosty. Before we knew it, we were approaching the North Pole! 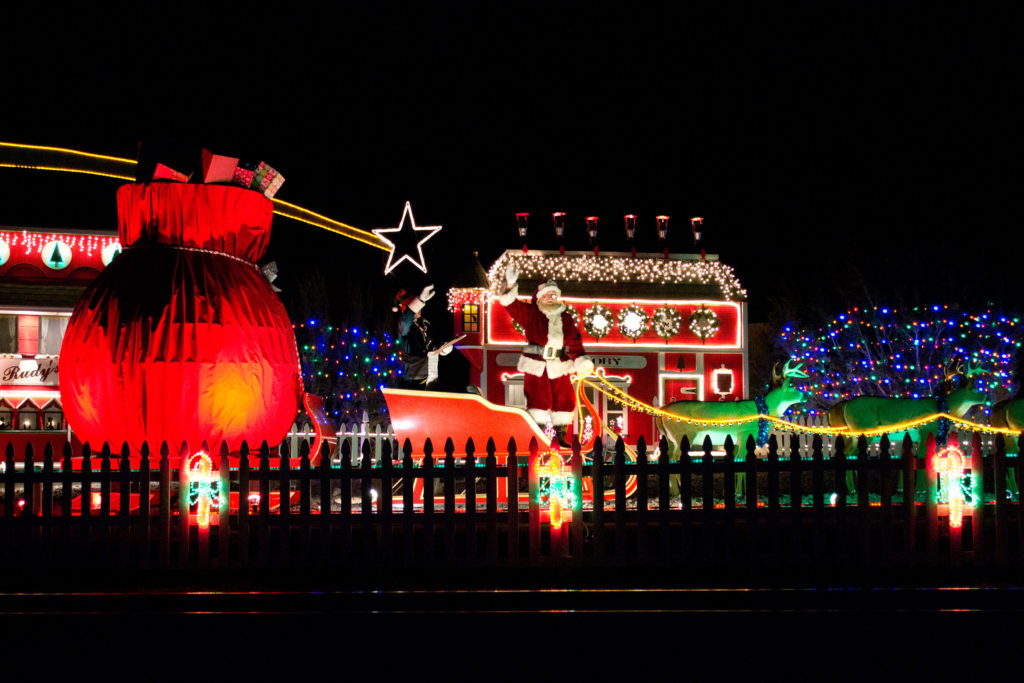 Crew members give the parents a heads up that we’re getting close and what side of the train is best for viewing. Adults are then encouraged to move to the non-Santa side of the train, to give the smaller passengers a chance to see the Big Guy for themselves. The girls were so excited!

Once at the North Pole, the train then began heading back to Williams. But what’s this? Why did we stop? To pick up a special guest, of course! Santa Claus is on the train! 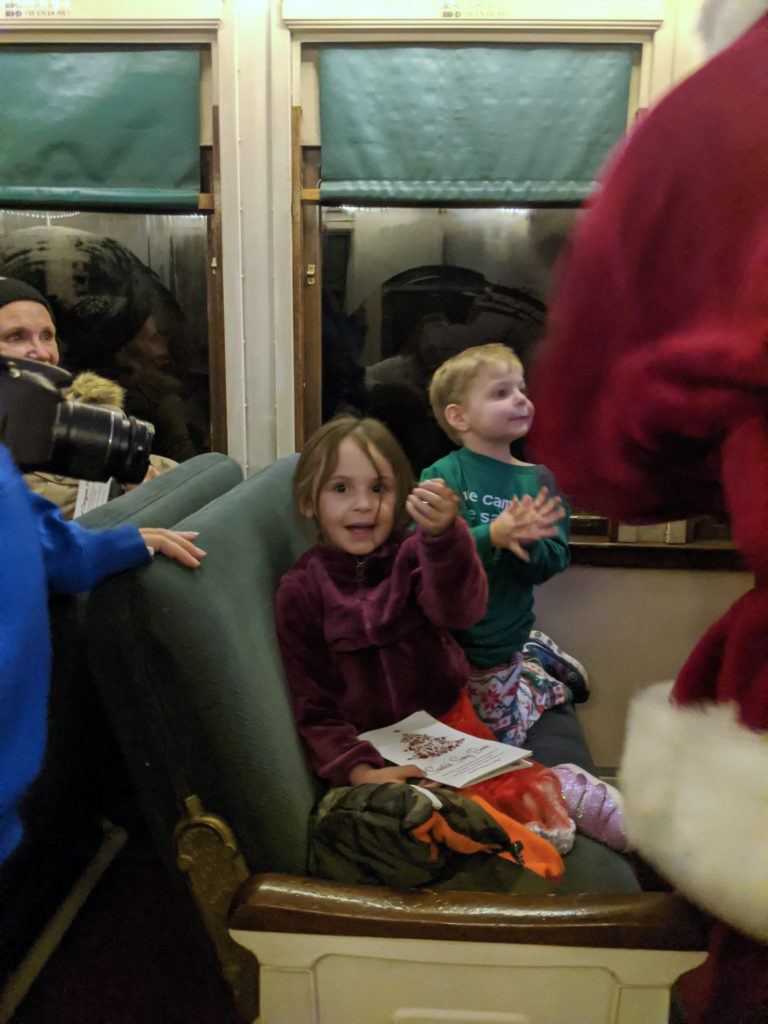 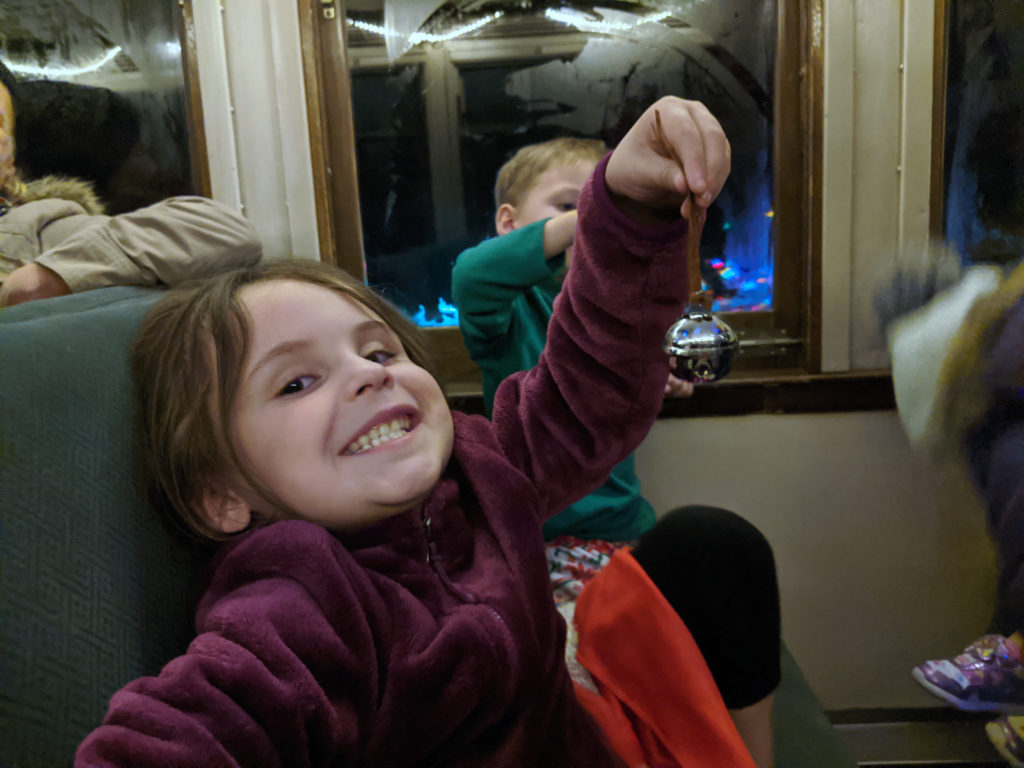 While he doesn’t stop long enough to really chat with each child, he made his way through the train car handing out sleigh bells to each and every passenger. Adults included!

Then the ride back was filled with more singing and even a friendly boys vs. girls song/dance competition. (Girls won!) 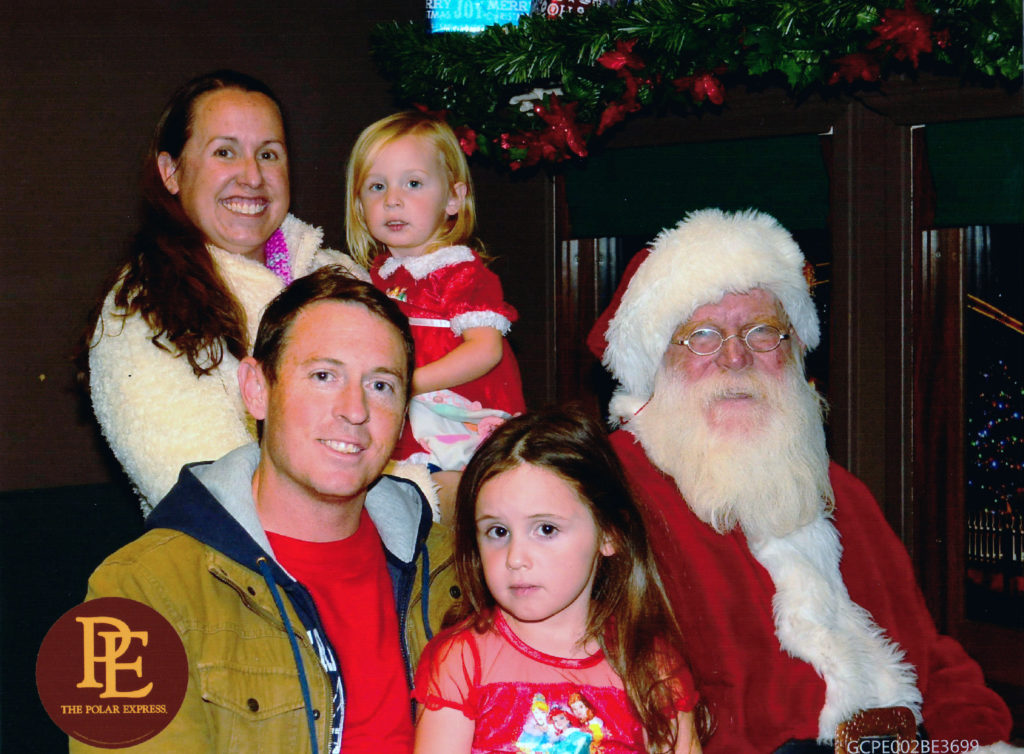 The whole train ride took about 1 1/2 hours, so it was about 9 when we finally got back to the station. At this point we hit the gift shop for a couple souvenirs and then were persuaded to head to the Polar Room to see Santa (you can Mrs. Clause there too). Of course, in typical small child fashion, once it was our turn to see Santa, Emma’s excitement turned into fear and we got pretty terrible Santa picture (Hubby and I weren’t even supposed to be in the picture originally), but c’est la vie! Memories were made! 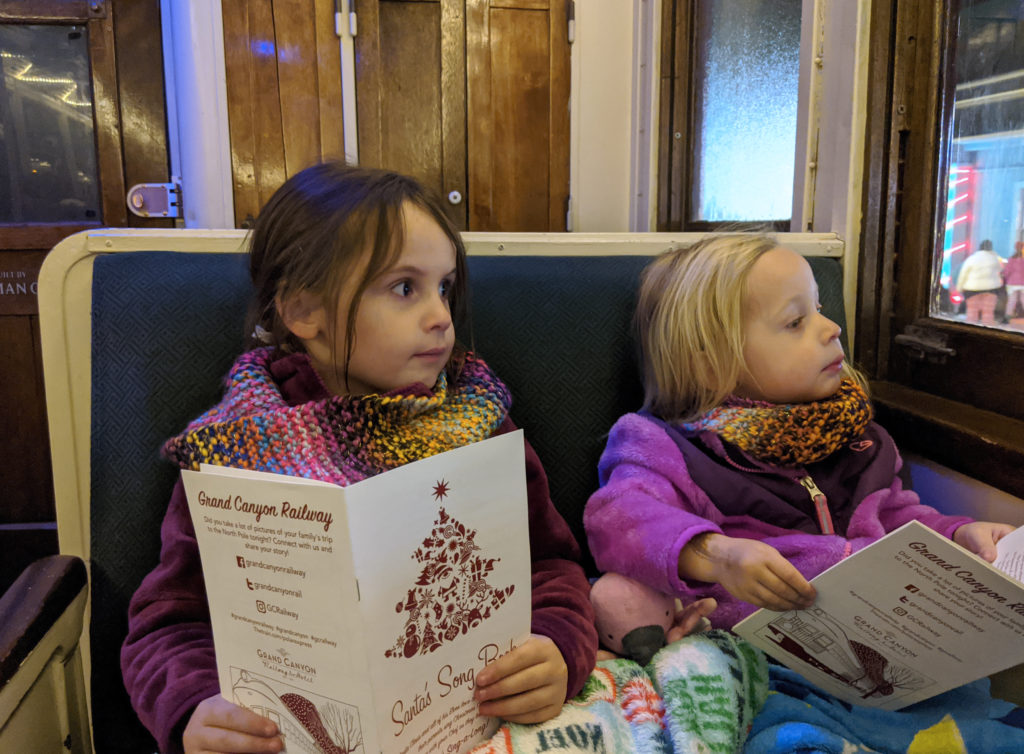 It was a fun ride and the girls had a great time! Emma was so excited that she was getting to ride the “real, live Polar Express!” It’s definitely an experience I’d like to have again, given the opportunity (maybe when Charlie is a little older and can get in on the excitement). I will say that given my girls’ ages (2 and 5), the 7:30 departure time was bit late for them. That’s usually they’re bedtime. And while we have no problem letting them stay up late on special occasions, by the time we got back to our motel, it was almost 10:30 and the girls were exhausted. So for our next trip, we’ll definitely shoot for a 5:30 departure time. 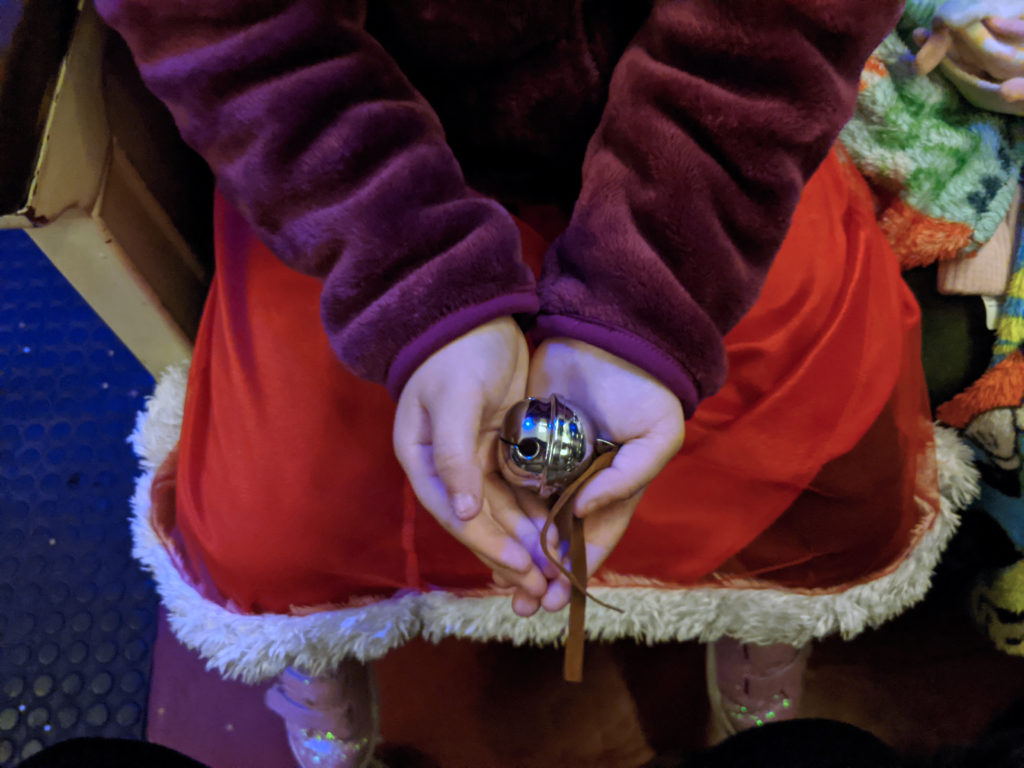 Have you ever ridden the Polar Express? What did you think about it? 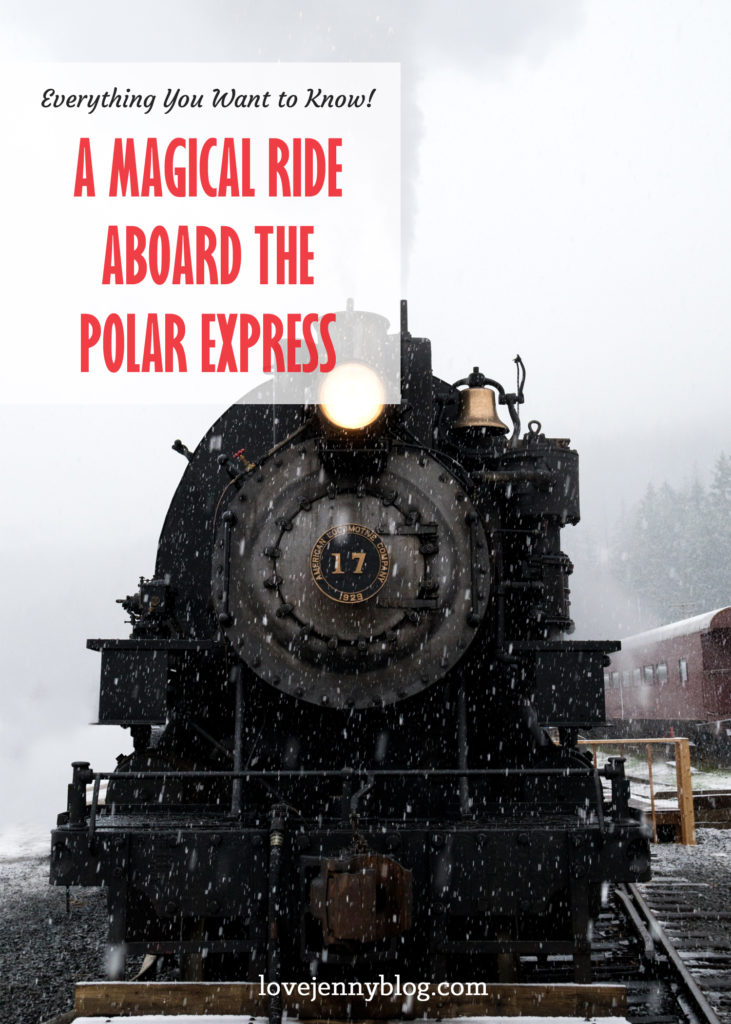 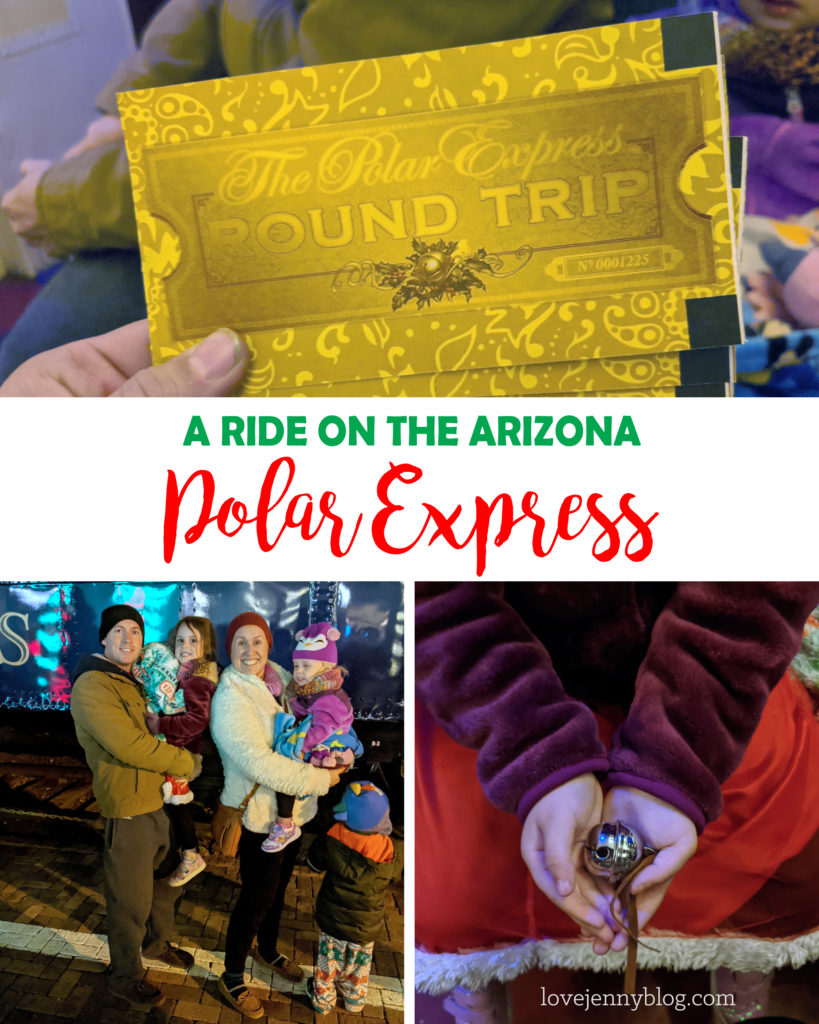 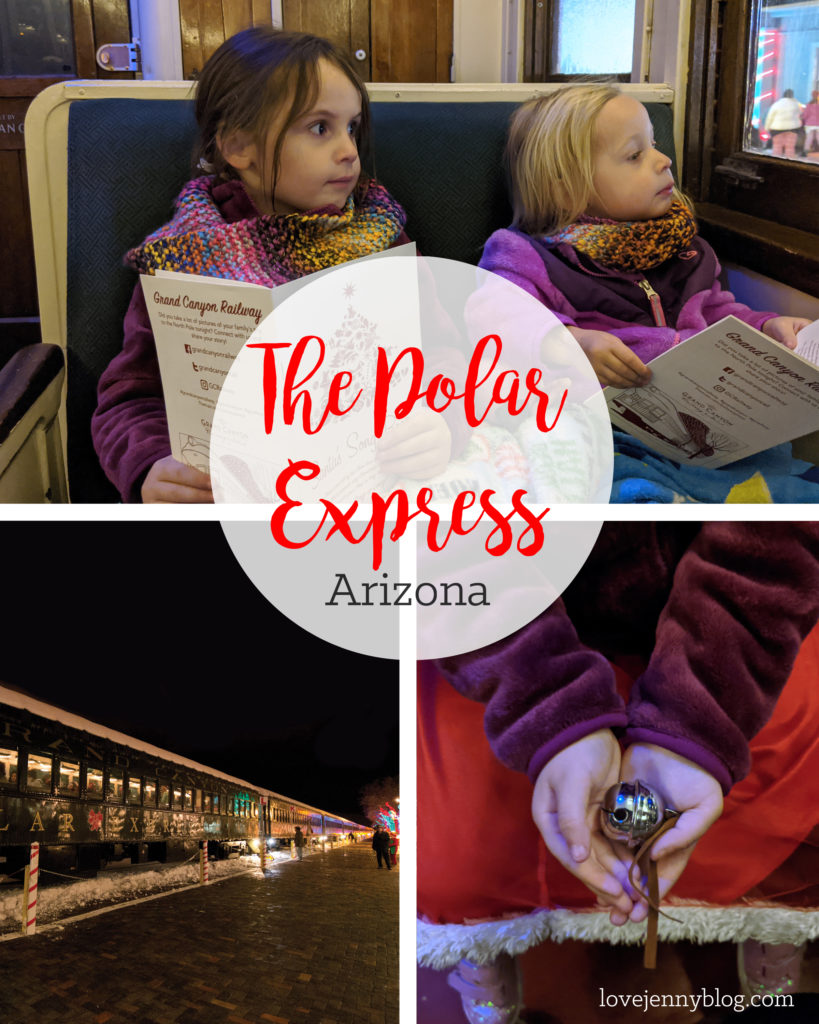 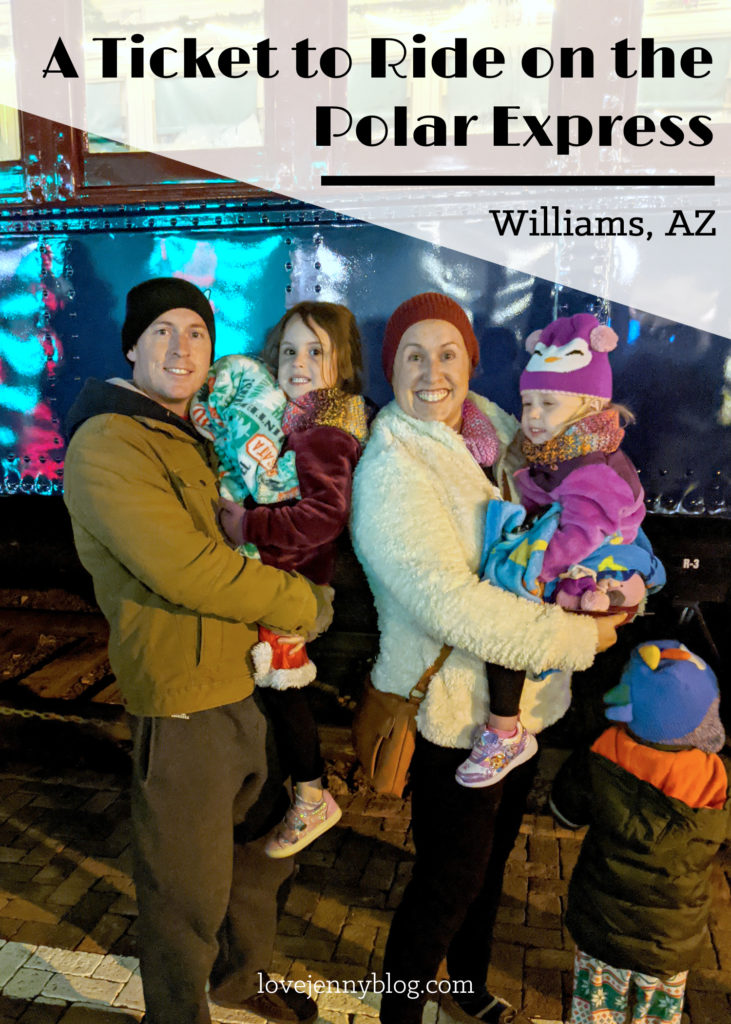